March 18, 2018 – After a leisurely Sunday brunch at the Old Bahama Bay pool club, Emmanou eases out of the Bay in the early afternoon for our 23 hours passage to Harbour Island – known colloquially as Briland (say it quickly with an Island accent and you’ll get it).  The seas are again dead calm as we pass the busy commercial port of Freeport and settle into Karin’s watch schedule.

Without fuss we arrive the next morning at the entrance to Devil’s Backbone, a scary narrow passage around North Eleuthera bordered by shallow reef on one side and sandy beach on the other.  Old hands will visually navigate the passage reading the water depth by the hue of the water: light blue shallower water, darker blue deeper water – unless it’s shallow sea grass or corral heads! — yellow sand bars and any mixture of the above.  As a neophyte crew, we anchor up and wait on the arrival of Captain Kirt (Heart of Darkness or Star Trek — depending on your inclination), an 80-year old pilot from Spanish Wells, a community to the South.  Spanish Wells is a white Bahamian fishing community with a history of xenophobia and consequently narrow gene pool.  Captain Kirt arrives as arranged, ties up his tender to the swim platform, takes over the helm, and speeds through Devil’s Backbone at full throttle while we take turn peering over the bow trying to learn how to read the water.  Kirt’s a perfectly pleasant widower living with his only child – a grown daughter – probably spells the end of the line for his family’s five generations of Spanish Wells pilots.  Emmanou’s Raymarine navigation system is set to track our passage so that we can follow the breadcrumbs on the way out. 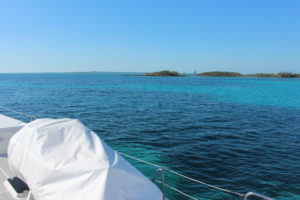 By noon we are anchored on the bay side of Harbour Island South of the Island’s three Marinas (Valentine’s, Romora, and Harbour Island) opposite the private dock of the vacation home of one Jerry Kirby, professional sailor and veteran of many America’s Cup, Volvo Ocean, Fastnet and multiple other campaigns – Jerry estimates he’s sailed around the world some 22 times – and his wife Kim, both Newport friends of Tony’s.  Jerry’s brother Matt and wife Michelle, Tony’s Newport neighbors, come out to welcome us on their paddle boards and promptly set us up with a knock down rate at Harbour Island Marina through their friend, Aldon, who runs the marina.  We soon learn that Harbour Island is not just the hang out of the rich, but of families that have come there for many generations.  Matt grew up with many of the current generation of Bahamian managers and owners of local businesses (there is virtually zero degrees of separation on the island).  We learn of popular night time hang outs such as Daddy D’s (D for Devon, a colorful local character) and Vickam’s – also known as Victims – that gets going around 3am.  The town is seemingly populated by a church on every block of any denomination you chose.  Whatever they get up to at night, these folks are going to heaven! 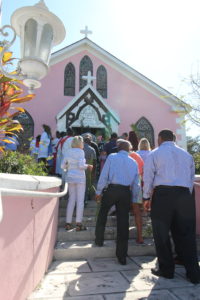 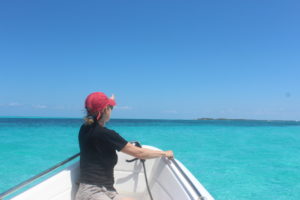 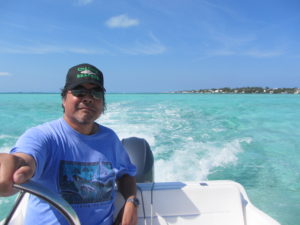 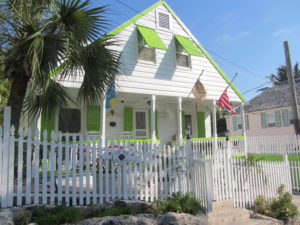 After a couple of futile days of trying to arrange a pump out from the only pump out truck on the island we decide to take a run out to the Atlantic side of the island to ditch our black water tank 3 miles offshore (as is allowed by international convention) in nearly 5,000 ft depth.  The water on the island is somewhat brackish and no one suggest drinking it, so we crank up the noisy water maker and start producing <100ppm reverse osmosis water (potable tap water can run up to 500ppm) at 30GPH into our water tank.  With the mild breeze, we turn off the ship’s AC and significantly reduce our Carbon footprint – not least limiting our power consumption that is being metered and billed at $0.65/KWH from over $50/day to around $15/day.

After a week, Tony heads back to his Newport family, and Karin and Thach settle into the island life and ready the boat for incoming visitors…

4 thoughts on “Briland here we come”