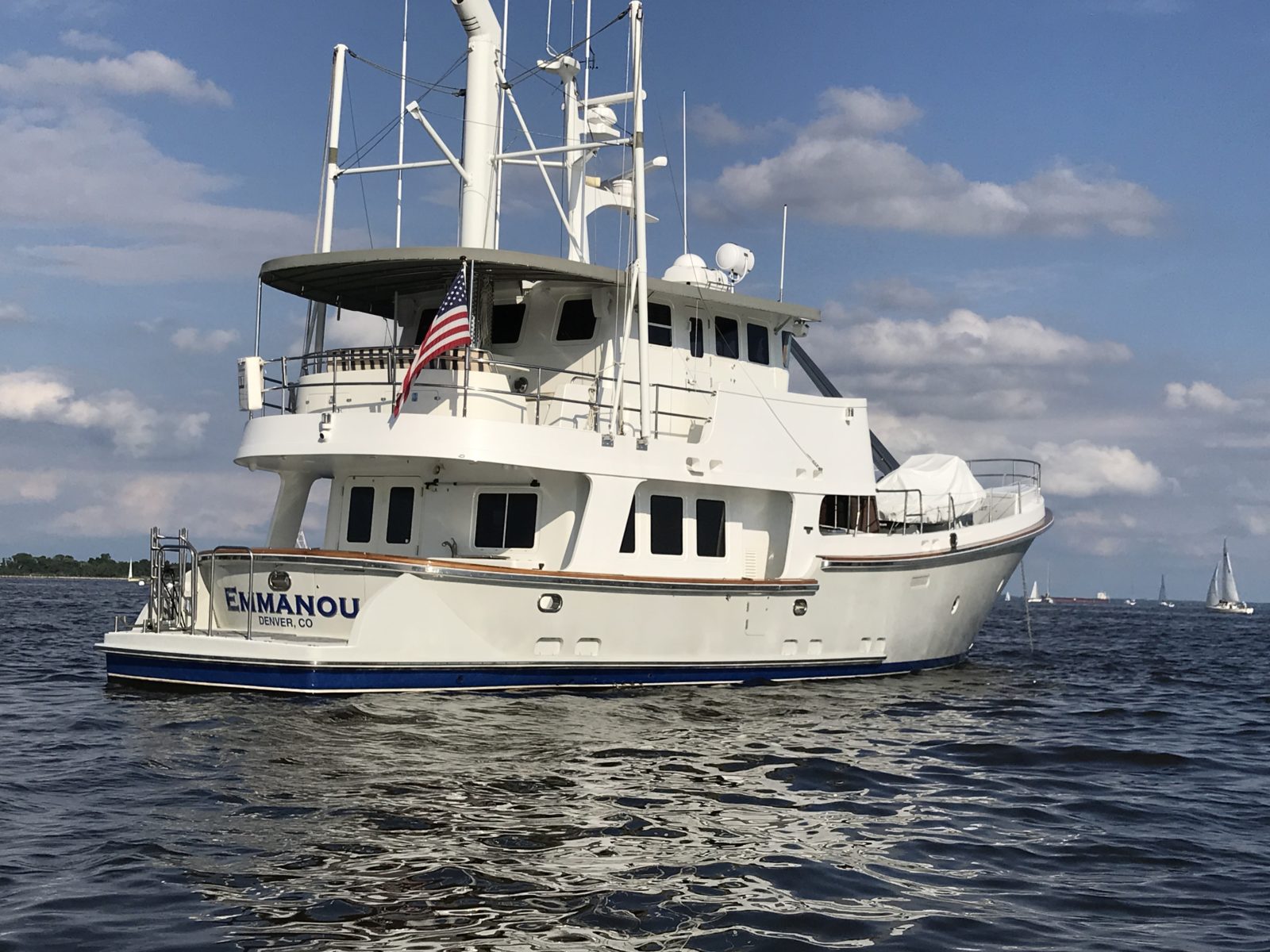 April 24, 2017 – After a couple of years of looking at trawlers at various boat shows, we are finally closing on the purchase of a Nordhavn 62, hull #15, built in 2000. She’s a looker: long raking foredeck with a 14-foot AB tender with 70HP outboard and a Seadoo Jetski sitting either side of a stainless-steel davit, classic pilothouse and superstructure astern with tall dry stack. But it’s the hidden bits that excite Thach: 325BHP turbo-charged main diesel engine, 70BHP diesel wing engine, 20KW diesel generator, water maker, hydraulic stabilizers, hydraulic bow and stern thrusters, 2700 gallons of fuel tanks with a 3,000 nautical-mile range. Karin’s list differs: spacious salon, sleeps 11 in 5 cabins with 5 individual heads and showers, 3 fridges and 2 freezers, washer, dryer – 60 tons of displacement to tackle any long passage on the high seas. After an offshore purchase closing, 3 miles off North Palm Beach (for tax reasons no one can quite explain to us), she is hauled out at the Seminole Yard for a bottom paint, followed by a long list of work items, indicated by the vessel survey, which would run the next 6 weeks. 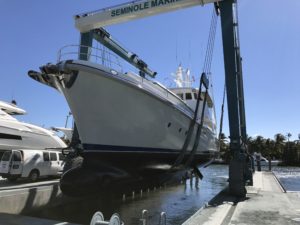 June 13, 2017 – Karin and Thach start their 3-day boat systems training from James Knight, owner of YachtTech and renowned Nordhavn guru. Then off to PBI to pick up insurance-mandated Training Captain John Stemke. He turns out to be a body double for recently fired FBI chief James Comey – very suspicious timing – Thach makes a mental note to suspend all ongoing illicit activities.

May 25, 2017 – After a week of training, Captain John Stemke reluctantly confers Thach and Karin a certificate of competency. We prudently decide to have him come back to accompany us on the first leg of our trip Northwards upon completion of the ongoing work on the boat. Insurance requires the boat to be North of Florida during hurricane season, staring July 15.
June 13, 2017 – The boat’s new name is applied to the transom: Emmanou – Emma’s nickname given to her by Badia, her French-Moroccan nanny from way back when. Champagne ceremony will await the introduction of Emmanou to Emmanou… 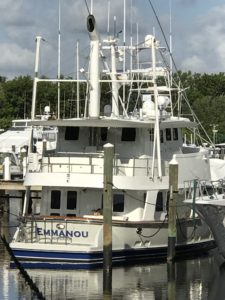 June 16, 2017 – Sea trial upon completion of repair and maintenance items in readiness for our planned departure North the next day reveals main engine mounts have been sheared. Immediate blame is placed on the fresh bananas Thach brought on board for his breakfast crepes – and thus we are introduced to one of the many marine lore superstitions. Departure is delayed as the engine mounts are replaced the next day.

June 17, 2017 – Emmanou is purged of all traces of bananas (Yes, we have no bananas!) and with fresh engines mounts the second sea trial is a success. Thach, Karin and Captain John prepare for the trip North with a discount King Crab dinner at Cod and Capers in North Palm Beach.
June 18-20, 2017 – A morning of inter-coastal waterway (ICW or “Inside”) to Fort Pierce inlet and then off into the Atlantic Ocean (offshore or “Outside”) for a 2.5 day run to Wilmington, NC, Captain John’s home. We split watch duties: 3×4-hour day watches and 6×2-hour night watches. Normal cruising offshore speed is 8-9 knots at 1500-1800 rpm, but we catch the Gulf Stream and get up to a blazing 14 knots for long stretches, cruising across the shipping lanes emanating from Jacksonville, Savannah and Charleston. Emmanou behaves impeccably, stabilizers eagerly countering roll in 4-5 ft seas. A school of Dolphins hitch a ride on our bow wave. No one succumbs to seasickness – a major relief as this was a big unknown for the both of us – some friends have since pointed out that we might have wanted to check that out before putting down the deposit on the boat…

June 20 to July 15, 2017 – Emmanou is safely docked in City Port marina in Wilmington, NC while we go off to Europe to visit old Shell friends, Rupert and Dagmar, in their Chateau in the Dordogne, check out Basque country and pick up Emma from Bryanston School. Minor incident: we received a 3 am call from the Wilmington dockmaster to tell us that they had apprehended a drugged out young lady trying to break into Emmanou. No harm done.
July 15, 2017 – Karin is still not ready to let go of our training Captain, so John tags along for the next leg. To keep Captain John on his toes, old rugby buddy and compulsive prankster Tony Leach comes down from Newport to joins the crew. Inside run to Wrightville Beach anchorage. Dropping anchor operations do not go smoothly, the team post-mortem yields another Karin procedure laminated checklist (to supplement the start-up checklist, shut-down checklist, fuel tank control sheet, spares list, freezer inventory list…). 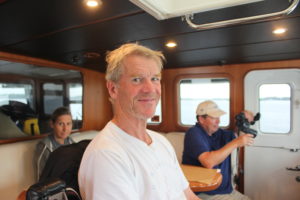 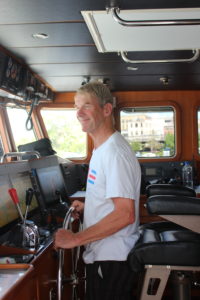 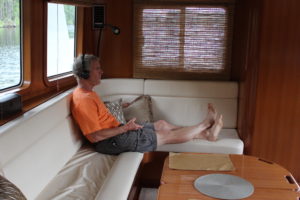 July 16, 2017 – Outside run to Beaufort Inlet and then ICW North to Adams Creek anchorage. Along the way, some sloppy route plotting by Thach leads to Emmanou running the wrong side of a channel marker buoy at full-speed into a sand bank (with Tony at the helm) – adieu fresh paint job. Upon arrival at Adams Creek, and armed with Karin’s new anchoring checklist, the crew perform a textbook anchor drop to make up for it.

July 17, 2017 – Continue North on the ICW to Belhaven anchorage. Tender into Belhaven for a few beers at a Confederate flag adorned pool bar and a surprisingly excellent dinner at the Spoon River restaurant accompanied by voluminous tasting flights of wine.

July 18, 2017 – Long run up to Coinjock – with a quick stop to pick up 2 lbs. of fresh shrimp — home of the cheapest fuel on the ICW ($1.96/gallon for diesel). 2000 gallons and a $4K fuel bill later, Emmanou is sitting low and nose down in the water with a slight sad list starboard – a bit like Thach after excessive partying. The crew eschew Coinjock’s famous ribeye in favor of Karin’s delicious shrimp pasta dinner.

July 19, 2017 – Final leg to Ocean Yacht Marina in Portsmouth. Captain John takes his leave to get back to his career as an ex-FBI agent. Tony heads back to torture his Newport family. And Thach and Karin fly back to New Haven for the weekend: Boston/Joan Jett concert for Evan’s 19th birthday and Kurt Roeloff’s 80th surprise birthday party for his dad. 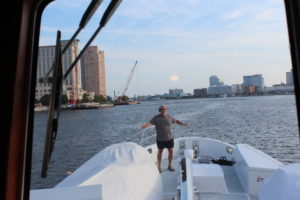 July 25, 2017 – Another buddy, Jim Costello, former EmployeeMatters colleague and now retired to fishing off Cape May, joins us for our first Training Captain-free outing. Driven down by his daughter Kathleen, Jim comes bearing gifts of fresh (never frozen, caught same day) tuna steaks and other fancy meats – greatly enhancing Karin’s culinary arsenal for the four-day leg to Cape May. Full first day run in the Chesapeake across choppy seas to Solomon Island. Emmanou is easily up to the task – steady she goes. Tight Solomon Islands anchorage shared with two sailboats successfully negotiated, we tender onshore for crab dinner at Stoney’s Kingfisher Seafood Bar & Grill.
July 26, 2017 – Short 6-hour run up to Annapolis for anchorage off the Naval Academy sea wall. Amateur move-of-the-day: anchor wash is left on for the trip. Tender into town for beer and oysters followed by course side viewing of Wednesday evening of sailing regatta. Wind and waves suddenly pick up for return to Emmanou. Karin drops her iPhone in the bay getting off the tender. The mood improves over steak, grilled veggies, and salad. 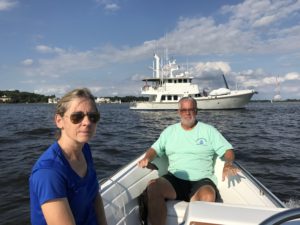 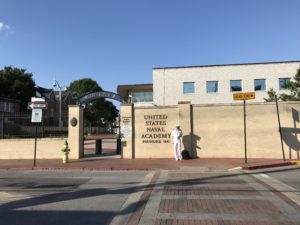 July 27, 2017 – Another short run up to a secluded anchorage in the mouth of the Bohemia River. Karin is impeccable at the helm for the anchor drop. Amateur move-of-the-day: transom door is left open for the trip. Grilled Tuna steak and corn on the cob dinner preparations are interrupted by a sudden shut down of the generator. With telephonic assist from Rob Etheridge at YachtTech, we diagnose a high temp shutdown due to lack of sea water coolant. Many theories, but we decide to replace the sea water pump impeller. Traces of dried salt deposit above the sea water line syphon vent also mandates replacement of the duckbill valve. The generator restart is interrupted to reorient the duckbill valve (sea water spraying the engine room ceiling). Second restart attempt settles down at a normal 180-190F operating temperature. All systems go again – most importantly the cockpit electric grill. Late dinner service is resumed and consumed with a certain sense of accomplishment, surrounded by a swarm of gnats that entered the salon while doors were left open with the AC down. The costly spares inventory starts to make sense. 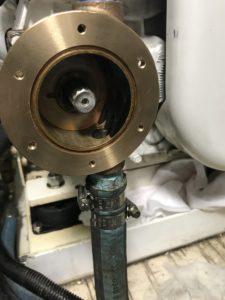 July 28, 2017 – Planned early start for a long 75 nautical miles run to Cape May is delayed by dense morning fog. We eventually weigh anchor at 8 am, and boosted by friendly tidal currents through the C&D (Chesapeake and Delaware) Canal and down the Delaware Basin we dock up at Two Mile Marina in Cape May by 5 pm just ahead of a big rainstorm and high winds. Emmanou takes up most of a 90 ft T-head and is eyed suspiciously by the dock master. He is not satisfied with my assertion that Emmanou is 62 ft long. The owner’s manual says overall length in 67 ft including swim platform. He presents me with a docking bill for 70 ft – no arguing with him, he tape-measured it and included the anchor. Extra docking expense does not stop Thach from indulging in an all-you-can-eat crab dinner at Two Mile Crab House. Power line problems delay the drive back to New Haven the next day as we replace a main panel breaker – one more repair and Thach thinks he could qualify for a fancy tool belt and linseed oil cologne…

6 thoughts on “In the Beginning…”