August 31, 2018 – From Yarmouth, the Westward crossing of the Gulf of Maine was a 12-hour run which we did as an overnight run to Mount Desert Island (MDI), home to Acadia National Park, the second most visited US National Park (after Yellowstone).  We anchored in Norwood Cove, just North of Southwest Harbor, home of the Hinckley Yard, surrounded by a mooring field of classic looking Hinckleys of all shapes and size, both elegant motor cruisers and sailboats.  Highlights of our stay were bike rides around MDI, hiking up Cadillac Mountain (the highest point on the Eastern shore where one can catch the first glimpse of the rising sun), picking out a fresh lobster for steaming and eating 15 minutes later at Beal’s Lobster Pier, and the best cooked half chicken ever – I kid you not – at Red Sky restaurant in Southwest Harbor.  We did take a detour off the park loop trail to take a look at Bar Harbor, on the North West side of MDI, which was as expected a bit of a tourist trap.

From there, we worked our way down the Maine coast, stopping at Rockland (a haven for art galleries including the Wyeth family collection), Boothbay, and York Harbor – where Emmanou docked at Danny Donnell’s single face dock run by 100-year old Danny.  Danny says George HW Bush and his triple-outboard (the secret service boat apparently only has two outboards) center console fishing boat has first dibs on the dock, but of late 41 has only come by a couple times a season. 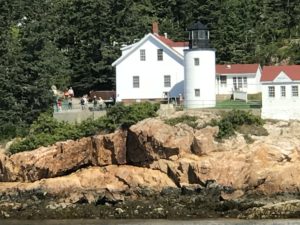